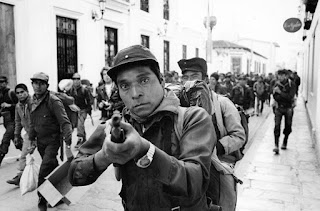 By David L. Wilson, Truthout
Monday, August 21, 2017
The North American Free Trade Agreement (NAFTA) went into effect at midnight on January  1,1994. That night, thousands of Indigenous Mayans rose up in arms in the southeastern Mexican state of Chiapas, seizing at least five towns and declaring NAFTA a "death certificate" for people like themselves. This was just the beginning of Mexico's troubles in a year that brought countless protests, hotly disputed elections and the assassinations of two of the then-ruling party's leaders. 1994 ended with a sudden devaluation of the peso, the start of an economic collapse from which the country didn't recover fully for years.

NAFTA is back in the news this month: On August 16, US Trade Representative Robert Lighthizer met with his counterparts from Canada and Mexico, the other two NAFTA nations, to open talks on renegotiating the pact.

While it's true that NAFTA was just one of the many problems Mexico had in the 1990s, we have to wonder, given the renewed focus on the trade accord, why US mainstream media have carried so little discussion of the events that accompanied NAFTA's rollout in Mexico.[…]

Posted by Weekly News Update on the Americas at 10:19 PM