The Part of “Illegal” They Don’t Understand: Book Review

Anyone who really wants to understand U.S. immigration policy needs to read the brief history of the U.S.-Mexico border in Aviva Chomsky’s often-brilliant new book on immigration.1

Politicians constantly tell us we have lost control of the border. In fact, as Undocumented demonstrates, never in the 166 years since the border was established by the 1848 Treaty of Guadalupe Hidalgo has it been so tightly controlled as it is now. For nearly half its history it was exactly the thing immigration opponents say they fear most—an open border. The first serious restrictions did not come until a head tax and a literacy requirement were imposed in 1917, and even then there was an exemption for Mexican workers, the people most likely to enter the country from the south. The creation of the Border Patrol in 1924 was mainly a Prohibition Era measure to keep alcohol out.

Far from trying to control the border, U.S. businesses and politicians were trying to get people to cross it.[...]

Read the full article:
http://monthlyreview.org/2015/10/01/the-part-of-illegal-they-dont-understand/
Posted by Weekly News Update on the Americas at 11:52 PM No comments: 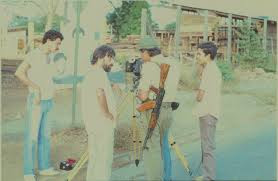 With SUSAN MEISELAS and HERMIONE HARRIS

MARK KARLIN (1943-1999), one of the greatest British filmmakers of his generation, created an outstanding body of philosophically rich, formally bold work that explored themes of history, memory, labour, and political agency in a time of neoliberal despair.

Foremost among his achievements are the five films he made on the Nicaraguan revolution: spanning the Sandinista decade, focussing on rural and urban grassroots movements, attentive to the sadness and disappointments of the revolutionary process, they are a remarkable chronicle of a remarkable era.

MEMORY AND ILLUMINATION: THE FILMS OF MARC KARLIN, the first US retrospective of his work, begins with two works from this period.

VOYAGES (1985) is composed of stills by renowned Magnum photographer SUSAN MEISELAS taken in 1978 and 1979 during the overthrow of the fifty-year dictatorship of the Somoza family. Written in the form of a letter from Meiselas to Karlin, it is a ruminative and often profound exploration of the ethics of witnessing, the responsibilities of war photography and the politics of the still image,

SCENES FOR A REVOLUTION (1991) is a film about aftermaths and reckonings. Revisiting material for his earlier 4-part series (1985), Karlin returns to Nicaragua to examine the history of the Sandinista government, consider its achievements, and assess the prospects for democracy following its defeat in the general election of 1990.

Posted by Weekly News Update on the Americas at 7:07 PM No comments:

Email ThisBlogThis!Share to TwitterShare to FacebookShare to Pinterest
Labels: Nicaragua

U.S. and Dominican Immigration Policies: Is There a Difference?

Texas officials have now found a way to circumvent the long-established understanding that children born in the United States are automatically U.S. citizens.

Over the past year some state officials have been refusing to provide copies of Texas-born children’s birth certificates to their undocumented parents. The Texas bureaucrats don’t try to deny that the children are citizens; instead, they simply demand that the parents produce certain types of identification documents—-documents which many unauthorized immigrants from Mexico and Central America are unable to obtain. The result is that the kids are being denied their rights as U.S. citizens—-including, in some cases, the right to enroll in kindergarten—-and may end up stateless.

This subterfuge must sound familiar to many Dominicans of Haitian ancestry. The current threat by the Dominican Republic to expel tens of thousands of Dominican-born Haitian descendants evolved over the past decade out of an unofficial practice very much like the one in Texas.[...]

Read the full article:
http://upsidedownworld.org/main/caribbean-archives-45/5495-us-and-dominican-immigration-policies-is-there-a-difference
Posted by Weekly News Update on the Americas at 10:41 PM No comments: