Let’s Call the “Border Crisis” What It Is: Another Big Lie From the Right

Undocumented immigrants aren’t actually a problem, but the Republican Party has framed them “as criminals and lawbreakers and a grave threat to the nation in order to motivate and mobilize the Republican base, to great effect,” Massey told Truthout. Up until now, the Democrats have failed to push back, he added.

Republican politicians and commentators spent the last week of June promoting their claim that this year’s increase in apprehensions at the U.S.-Mexico border constitutes — in the words of Fox News host Sean Hannity — “a crisis of a monumental scale.”

The campaign’s high point came on June 30 when former president Donald Trump visited a stretch of the border wall near Pharr, Texas, and delivered a number of “questionable statements” about his administration’s supposed enforcement successes.[…]

Posted by Weekly News Update on the Americas at 2:26 PM No comments:

“The violation of asylum seekers’ rights over the past three years under both Trump and Biden demonstrates how easily a president can ignore and even defy the law — especially when the victims are poor or marginalized and not enough of us speak out.”

There’s a crisis on the imaginary line that separates the United States from Mexico, but it’s not the one politicians and media outlets have been talking about.

Earlier this year, the US political class was focused on a supposed “surge” in migration and on serious — but not unprecedented — failures in the treatment of unaccompanied minors. This distracted attention from two far more serious issues: the Trump administration’s misnamed Migrant Protection Protocols (MPP), now discontinued, and the ongoing use of the US health code’s Title 42 to exclude asylum seekers from entering the country.[…]

https://jacobinmag.com/2021/07/us-immigration-policy-legality-title-42-biden-trump-asylum-mpp-border-surge-human-rights/
Posted by Weekly News Update on the Americas at 3:17 PM No comments:

Hey VP Harris, Here Is a Progressive Way to Address the Root Causes of Migration

This isn’t to say that progressives should view their program as primarily an answer to the supposed “border crisis.” After all, there’s no reason to fear migration.... But the occasional spikes in border crossings give progressives an opportunity to go on the offensive, to describe the ways that their program would improve the lives of working people both at home and abroad.

The recent focus on the rising number of Central American asylum seekers at the U.S.-Mexico border could have one positive result: it creates an opening that activists can use to promote a progressive foreign and domestic agenda.

The two parties are split over how to slow the current rise in migration. Republicans favor the sort of harsh measures that the Trump administration inflicted on migrants; centrist Democrats also support deterrence, but they propose moderating it slightly and spending a few billion dollars to address Central American migration’s root causes. Vice President Kamala Harris’s statements during her June 7-8 trip to Guatemala and Mexico were typical.[…]

Posted by Weekly News Update on the Americas at 9:49 PM No comments:

Establishment coverage has featured hyperbole about recent migration trends and an inexcusable lack of historical context. Worse yet, this style of reporting could have serious consequences in the real world: It may sabotage prospects for a long overdue reform of the US immigration system.

It’s no surprise that right-wing media have hyped a supposed crisis on the US/Mexico border, or that much of the television coverage of current immigration issues has tended to be superficial. What’s striking is how badly the situation has been represented in the more centrist and prestigious parts of the corporate media.[…]

Posted by Weekly News Update on the Americas at 3:33 PM No comments: 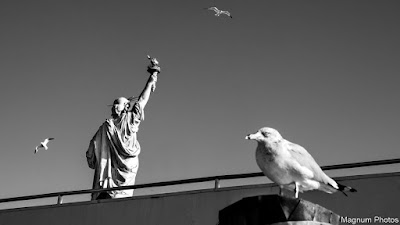 For years, the media narrative has been that repressive immigration policies—billions spent on immigration enforcement, families torn apart, thousands dying on the southwestern border—will somehow lead to wage hikes. They haven’t, and they won’t.

The Economist (2/15/20) ran a brief article last year with a startling headline: “Immigration to America Is Down. Wages Are Up. Are the Two Related?” Maybe, the article’s anonymous author answered, at least for the short term.

A few on the right were quick to cite this conclusion as support for former President Trump’s efforts to deter immigration.[…]

Read the full article:
https://fair.org/home/crediting-xenophobia-rather-than-organizing-with-raising-workers-wages/
Posted by Weekly News Update on the Americas at 3:11 PM No comments:

The Democrats’ immigration agenda: Bolder, but not bold enough

The immigration plank in this year’s Democratic Party platform is a reminder that real immigration reform isn’t going to happen without serious grassroots organizing.

The platform, which the Democratic National Convention approved on August 18, is largely based on a 110-page document produced by six policy task forces that former vice president Joe Biden and Vermont senator Bernie Sanders set up in May. According to the New York Times, the Democrats were seeking “to assemble a new governing agenda…far bolder than anything the party establishment has embraced before.”[…]

Posted by Weekly News Update on the Americas at 10:00 AM No comments:

Anti-Immigrant Policies Are Not Only Cruel, They Also Have an Economic Cost

Legalization and a fair work visa program would raise wages for many U.S.-born workers as well. This wage increase would in itself provide an important stimulus to an economy facing its worst crisis since the 1930s.

U.S. Citizenship and Immigration Services (USCIS), the government agency that processes visas, green cards and citizenship applications, claims it’s going broke. USCIS officials are threatening to furlough some 13,400 employees as early as August 30, after initially planning the measure for August 3. The furloughs would add to what was already a huge backlog in application processing, creating a disaster for tens of thousands of immigrant applicants. As many as 126,000 people already approved for citizenship may not be naturalized in time to register for the November elections.


Posted by Weekly News Update on the Americas at 5:02 PM No comments: