Bernie McFall was a mainstay of New York-area activism for many years: a reliable supporter of solidarity with Central America, Cuba, Haiti and Palestine; a strong unionist; a regular volunteer for WBAI and for recycling efforts; an organizer of New York contingents for the annual protests at the US Army School of the Americas.

Bernie died on Oct. 16 after battling two forms of cancer. Friends and colleagues will be holding an informal gathering on Friday, November 30 to share memories of Bernie. Filmmaker Konrad Aderer, who featured Bernie in his documentary about Farouk Abdel-Muhti, “Enemy Alien,” will show video footage of Bernie. Please join us. 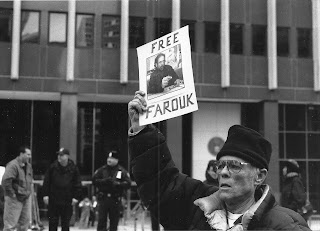 Bernie left a large collection of books on Latin America and the Middle East, along with reading materials in several languages, much of it in Arabic. He wanted his books to be given to people who could make good use of them. We will make the books available to the community before and during the memorial, starting at 6 pm.

For more information, write weeklynewsupdate@gmail.com
or visit http://weeklynewsupdate.blogspot.com/2012/10/bernie-mcfall-presente.html
Posted by Weekly News Update on the Americas at 10:50 PM